Thorn cover art and the Devil amongst the Tailors 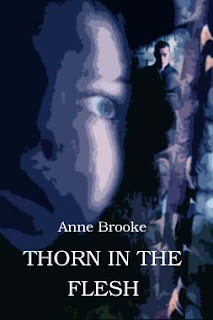 Had a fantastic time at Scottish country dancing last night - completely non-cool (whatever that means), I know, but it was great. Mind you, I was shattered after ten minutes, and the class was an hour and a half, so you can imagine what my muscles are like this morning. Not having a partner wasn't too bad either, and there were even numbers (more women than men, of course, but more men than I'd expected, and not all old!), so I could do most dances - one bloke sat out for a couple, but the tutor kept including me when I was least expecting it. While my mind (and everything else) remains something of a blur, I think we did four or five dances, all new to the class, but I can only remember the names for two of them: Dhoon, and the Devil amongst the Tailors. Which is a wonderful title so I just had to use it.

Anyway, I've signed up for the full monty today, so will be dusting down my kilt and funny socks ready for next week's class. The only worry I have is that my ankle didn't feel so good afterwards (the aftermath of twisting it on holiday, I'm afraid), but I have bandaged it up again today and am hoping for the best for next Wednesday.

This morning, I met Jane H for coffee & a bun in Godalming, which was great - soooo good to catch up, Jane! And the Slug & Lettuce cafe-bar surpassed itself by offering up hot blueberry muffins. Bliss indeed. Actually, the Slug & Lettuce appears - briefly - at the end of Thorn in the Flesh, but in a previous incarnation when it was rather less posh. I definitely prefer the new look.

Talking of which, the wonderful Penelope Cline has done a couple of superb cover options for Thorn, taking as inspiration a scene in the book, one of which I shall bravely attempt to add. Oh look, it's appeared! Isn't it fab? Thank you so much, Penelope! Hope to sort out with the Goldenford Gals soonest and get back to you!

On the way home, I popped in to see Gladys, who was tired, but brighter than she'd been last week, so I was able to stay a little longer than before. She tells me that in her younger days, she played the piano for a country dancing class, and would dearly have loved to try out the steps but was never able to, as she was the only piano-player in a five-mile radius. Shame really - I'm sure her rhythm would have been far better than mine.

For the rest of today, I've been editing Jackie's novel, Tainted Tree, for Goldenford. It's such a good story, and I do so love the heroine, Addie. She's a great character!

Tonight, I'll be carrying on with the editing, though I really have to catch up with the latest on "Strictly Come Dancing", and hoping for an early night. We have an action-packed weekend ahead!

And I've just finished Neil Rollinson's latest poetry collection, Demolition. He's always been one of my favourite modern poets, but I must admit this latest offering didn't quite do it for me. The passion seems to be diminished and the style more muted. Is it to do with age, I wonder? To be fair, there were one or two ace poems, but much of it seemed rather bland, in that particular blandness that 80% of modern poetry does seem to have now. Query: is it something they put in the water that they give to poets that makes so many of them sound the same? Or is it the "demands of the market" where publishers only want a certain type of poem, which they think sells? Hmm, much like the fiction business then. Lord save us all from losing our voices to the hum of the crowd!