They say trouble always comes in threes. . .
For sisters Lyn, Cat and Gemma Kettle, the year they turn thirty-three is no exception.
Sensible Lyn is struggling to balance being a mother, wife and businesswoman without losing her mind. Cat, whose perfect marriage is the envy of all her friends, never suspects that her husband has been hiding a secret that will tear her life apart. Directionless Gemma changes jobs and boyfriends every few months and has just met a new man who could be the one to unlock her hidden past.
Through everything, the bonds of the sisters are strong enough to withstand whatever life throws at them. That is until the night of their thirty-fourth birthday dinner, when home truths are revealed and things are said that can't be taken back . . .
My mini review:

A great book with an excellent understanding of the tugs of love and hate that run through families and which are both appalling and highly amusing. The relationship between the triplets, Lyn, Cat and Gemma is excellent and I loved all three of them - both together and apart. They all had fabulous stories to tell, and the plot lines were gripping.

The only place I felt let down was the career resolution for Cat which is now so cliched (and totally unrealistic ...) that it makes my skin itch - another career should have been found and surely wouldn't have been too hard to do! Otherwise, a great 4-star read.

From Loneliness to Love: Daily Meditations from The Book of Ruth

I'm happy to say I have a new book out, especially for women. Because we're worth it!...

From Loneliness to Love: Daily Meditations from The Book of Ruth: a series of daily meditations from the Book of Ruth, written especially for women.
Each day focuses on a section of this incredibly moving story, highlights the main themes arising from the passage and ends with a prayer to help you grow closer to God.
Subjects for meditation and prayer include grief, hope, trust and love.

Buy the ebook at Amazon
It costs 99p as an ebook.

Buy the paperback at Amazon
It costs £2.99 as a paperback.

The Roundabout Man by Clare Morrall: a compassionate and gripping read

Who is the Roundabout Man? He calls himself Quinn, the name of a boy in a world-famous series of children's books. What he hopes no one will discover is that he's the real Quinn, immortalised as a child by his mother in her entrancing tales about a little boy's adventures with his triplet sisters.

It's always been an utter mystery to me why Clare Morrall isn't more widely known as she's one of the best living writers we have in the UK. Her books are always a joy to read and this one is no exception. Morrall dissects the convoluted life of Quinn gently and with great compassion, and his life, both as a child and an adult, rings clear and true.

It's a gripping and humane story, and I loved it. I'm already looking forward to her next book!

Yvonne Carmichael sits in the witness box. The charge is murder. Before all of this, she was happily married, a successful scientist, a mother of two. Now she's a suspect, squirming under fluorescent lights and the penetrating gaze of the alleged accomplice who's sitting across from her, watching: a man who's also her lover. As Yvonne faces hostile questioning, she must piece together the story of her affair with this unnamed figure who has charmed and haunted her.

This is a tale of sexual intrigue, ruthless urges, and danger, which has blindsided her from a seemingly innocuous angle. Here in the courtroom, everything hinges on one night in a dark alley called Apple Tree Yard.

It's a very different book from the recent TV series (which I also loved). This is far darker and more dangerous and deeper, and I much prefer it! I enjoyed the fact that the main character, Yvonne, is neither particularly likeable, nor particularly honest, but her voice is just so strong that she becomes an absolutely gripping character and I couldn't put the book down.

The writing is both detailed and precisely fitted both to the characterisation and the flow of the story which makes for a first-class read. Doughty is now on my reading list and I will definitely be getting more of her books.

The Miniaturist by Jessie Burton: a book of two halves 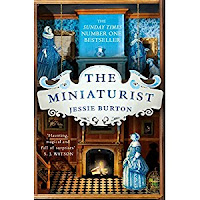 On a brisk autumn day in 1686, eighteen-year-old Nella Oortman arrives in Amsterdam to begin a new life as the wife of illustrious merchant trader Johannes Brandt. But her new home, while splendorous, is not welcoming. Johannes is kind yet distant, always locked in his study or at his warehouse office--leaving Nella alone with his sister, the sharp-tongued and forbidding Marin.But Nella's world changes when Johannes presents her with an extraordinary wedding gift: a cabinet-sized replica of their home. To furnish her gift, Nella engages the services of a miniaturist--an elusive and enigmatic artist whose tiny creations mirror their real-life counterparts in eerie and unexpected ways . . .Johannes' gift helps Nella to pierce the closed world of the Brandt household. But as she uncovers its unusual secrets, she begins to understand--and fear--the escalating dangers that await them all. In this repressively pious society where gold is worshipped second only to God, to be different is a threat to the moral fabric of society, and not even a man as rich as Johannes is safe. Only one person seems to see the fate that awaits them. Is the miniaturist the key to their salvation . . . or the architect of their destruction?

This is an interesting and brave book but it doesn't quite work; it's definitely a book of two halves, which don't hang together. The Nella of the first half is dull and weak, whereas the Nella of the second half is very feisty and gripping. I think there should have been more of the hint of feistiness in the first half to try to hold the book together. It's also fair to say that the writing of the first half is very long-winded, but suddenly when the plot actually begins half way through, this is when the story starts to sing.

I did have to say that I guessed about the baby issue long before Nella realised, so it was no surprise and really something of a cliche. Strangely, the story about the miniaturist is rather out of place and tends to slow the book down - we didn't need this and it all fades out into something nonsensical in the end anyway. Still, the portrait of a new and challenging marriage and the fabulous writing in the last few chapters of the book make this worth reading, but probably best to start halfway through. 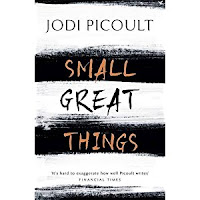 When a newborn baby dies after a routine hospital procedure, there is no doubt about who will be held responsible: the nurse who had been banned from looking after him by his father.
What the nurse Ruth, her lawyer Kennedy, and Turk the father of the child cannot know is how this death will irrevocably change all of their lives, in ways both expected and not.
My review:

On the whole, this book is a disappointment especially as usually I really love Picoult's books. This is definitely not her best and not even her most far-reaching work. The trouble is that the author has been so taken up by the nobility of her cause (campaigning against racism) that she has forgotten to write a novel. Most of the first three-quarters of the book could have been better expressed by means of non-fiction, and I felt that the material was being forced into a novelistic form which it definitely did not fit. As a result, Ruth is very dull and irritating and needs a good shaking every now and again - she repeats herself constantly and I ended up skipping her sections in order to read the sections on Turk or Kennedy, which were better written by far.

It's a great relief when the court scenes finally arrive in the last quarter of the book, and Picoult actually starts writing the novel rather than beating us over our heads with her cause. From then on in, I enjoyed the story, and it raced through to the dramatic (and, yes, a wee bit laughable) end. Ruth of course remains unbearably smug, but I loved the way things turn out for Turk. He at least is a great character.

I hope Picoult will remember to let the story and the characters (not the cause, please!) take centre stage for her next novel - a return to form would be appreciated!

Sherlock Holmes is dead.
Days after Holmes and his arch-enemy Moriarty fall to their doom at the Reichenbach Falls, Pinkerton agent Frederick Chase arrives from New York. The death of Moriarty has created a poisonous vacuum which has been swiftly filled by a fiendish new criminal mastermind.
Ably assisted by Inspector Athelney Jones, a devoted student of Holmes's methods of investigation and deduction, Chase must hunt down this shadowy figure, a man much feared but seldom seen, a man determined to engulf London in a tide of murder and menace.
The game is afoot . . .

Having loved the first book in this series, The House of Silk (well worth a read if you've not done so already), I was really looking forward to this follow up and read the whole story very quickly as a result. It's not entirely what I expected - yes, the description is fabulous and you do really feel as if you're walking through Victorian London with all the sights, sounds and smells that entails. The plot is also first-rate.

However, neither Holmes nor Watson appear in the novel until the very end (via a curious short story addendum) and there is therefore a great sense of frustration. The level of violence is also more than is necessary to my mind and I didn't need to have such detailed descriptions of it. The ultimate twist is good, but not what I hoped for and the end is ultimately very unsatisfying indeed. If there's a third book, then we do really need to have Holmes and Watson in it! Please?...