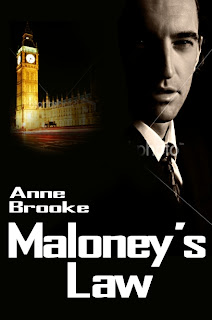 PD Publishing have sent me four samples of covers for Maloney’s Law – and this is my favourite. I love it! Just how I’ve been imagining Paul all the while I was writing him. I might ask them to fiddle around with the London context, but we’ll see. Anyway, I’m thrilled.

At work, I’ve been in meetings (ones I don’t have to minute, hurrah!) all morning looking at possible new website providers. And there’s another one of these tomorrow, so we can’t make decisions yet. However, I favour the first guys, although the people with the power favour the second guys – even though they’re more expensive. Groan. Anyway, whatever we get will be better than what we have now so in any case we’ll be smiling. And it’ll be much more whizzy. Double hurrah.

Ooh, and our new zappy desk lights have arrived, and are indeed super space-age in design. We love them and they make all the difference in terms of office gloom dispersal. It’s all dark outside the window and inside there are comforting pools of light. All very Dickensian, I suppose.

This afternoon, I’ve been attempting to write up more of yesterday’s minutes, just in order to keep on top of it all. Some hope! Tonight, I’m leaving work early (well, I got in early for the website meetings and I skipped my lunch hour, so I think I’m entitled) to have a Clarins facial & back massage. Bliss. I wouldn’t normally make an appointment after work, but this week’s days in have been shot to pieces, so I’ve just had to cope. Ah well! (Update - they cancelled my appointment, dammit!!! Still at least I managed to get some shopping done. Still, it would have been nice to relax for a while ...

I’m also hoping to catch up with last week’s episodes of “Ugly Betty” and “My Name is Earl” once I’m home, as the new episodes are tomorrow, and I’m terrified of losing the plot. (Plot? Plot? What’s that then …?).

Ooh, and Lisa Glass (who wrote the marvellous Prince Rupert's Teardrop) has put a review of A Dangerous Man on the Vulpes Libris review site under today's date, but which you can also see below:

"“Want to swap books?” Anne Brooke asked me last week. “Okay then,” I thought, “We both write on the dark side, so why not?” But I swore I wouldn’t let it interfere with my other reviewing duties. After all, I had five other books in the queue. And then I read the first page … Some time later my husband was nudging me but I managed to wave him off and kept turning the pages. After discussing Vulpes Libris with a friend I agreed that my reviews couldn’t all be raves, because, you know, people love grouchy reviews too, but here I am about to rave again because A Dangerous Man is the most gripping book I’ve read in years. Michael is a struggling artist in Hackney, just starting out and supplementing his income with a little bit of prostitution. He is desperate to be taken seriously as an artist and he eventually gets a commission to provide a city firm with some artwork, which is where he meets Jack: a handsome, if reserved, businessman. This part of the novel is incredibly erotically charged, and as readers and writers alike generally agree, ‘Sex is bloody difficult to write,’ so hats off to Anne Brooke. Jack and Michael get it on, and get together, which is where things begin to go wrong… The middle section of the novel slows in pace and becomes much darker. Michael continues to draw (and think) in shades of grey, and continues to do things that he regrets. Jack, however, is still sailing through life. He has a loving, wealthy family behind him, whereas Michael has only his wiles and a handful of tricks…excusing the pun. There are detailed descriptions of the drawing process, and the parallels between writing and drawing are obvious: the rejection, the self-belief (and lack of), the doubt of others, the manic creative flow. As a writer this did sometimes take me out of the narrative, as I found myself thinking about my own writing trials and tribulations, but non-writers would be immune to that, I would think. As I read A Dangerous Man I kept asking myself ‘Who is the dangerous man here? Is it the difficult (but refreshingly true to himself) Michael, or is it the figure of capitalism, Jack?’ Because, yes, Michael is ‘troubled’ and he both craves and despises normality, but surely Jack senses that? Does Jack really go into this with his eyes closed? Is Jack a simpleton? No, he is shrewdly intelligent. A ruthless businessman, we assume. Michael might be set up as the manipulative one, but Jack employs Michael as an artist mostly to get close to him, he forces Michael to endure his gratingly middle-class family, even though Michael can’t bear them, and he says that if Michael earns £500 to contribute to an exhibition, he’ll pay for the rest. Ah. Michael doesn’t have a job and there’s only one way he earns money, although apparently Jack is unaware of Michael’s rent boy activities. This part of the book is upsetting as Michael goes further and further to earn the money, and I couldn’t help thinking, ‘How many blow jobs does it take to earn five hundred quid??’ Some readers have wondered why Michael doesn’t seek ‘a real job’ rather than resort to prostitution. Well, there’s no reasoning with Michael, but I’d say he’s a creature of habit. The novel’s obvious Bad Guy is a nasty piece of work called Paul, who exploits and manipulates Michael at every turn…but my thoughts kept coming back to Jack. Is Jack the true Bad Guy? Does Jack represent a negative capitalist force manipulating the fates of lesser, poorer mortals? Well, yes and no. Jack is basically a pretty decent person. He does his best, but in his way he’s just as messed up by his upbringing as Michael. He’s as square as they come. He’s all for ‘being calm about things’ and treating matters of the heart in a logical fashion, but his lack of loyalty and ‘conditional love’ make things infinitely worse for Michael. Which is all to say that I am for Michael. He might be a loony, a weirdo wrapped up in himself, a psycho unable to function in social situations, but he’s direct, and I like that. The ending is dark and not entirely unexpected but it kept me on the edge of my seat, as despite fearing the worst, I determinedly hoped for the best. This page-turner is commercial fiction at its best. I defy anyone to read this and forget it. Michael is someone you remember."

Oh, and in case I haven’t said it already, I love my new cover!! Paul is just sooo one of my favourite characters (sorry, Michael, though of course I love you too …) – and certainly presentable enough to introduce to your mother without fear. Or not much fear anyway …

Yes it is great cover. Very eyecatching...and a very hansome man. Why are all the cute ones gay?!

I could tell you but then I'd have to kill you. :)

Just kidding. Great cover, very dramatic, best of luck with this one Anne.

Love the cover Anne - the image and the type face - perfect !

Yes, it's great, Anne. Congratulations on the cover and the review.

Thanks, guys! And I promise not to pry too much into the mystery, JB!

WOW - that is a really nice cover! Their covers haven't been fab in the past (not as bad as some) but they've obviously really improved! Well done!

I could say that I, too like the cover, but instead I'll say what a good title 'A Dangerous Man' is.

Thanks, Lexi - x2! Yes, I was quite pleased with the change in title too - all the way through writing ADM, it was actually called "The Story of M" but Andrew Taylor advised me to change it before I sent it out. He was right too!

Hi Anne, just catching up with your cover! Yes, what a great cover it is! Very powerful. And congrats on that great review from Lisa - very well deserved.

Thanks, Roger x2! Glad you like the cover! Yours is great too!