I'm happy to announce that my gay fantasy, The Gifting, is now published on the Kindle with a brand-new cover, which I really do love. So you can pick up a copy at the bargain price of only 77p at Amazon UK and $1.15 at Amazon US.
Here's the blurb:
Simon Hartstongue is a mind-reader, and branded a coward and a murderer. When his overlord and lover Ralph Tregannon turns against him, he is forced to embark on a treacherous journey to the distant and magical land of Gathandria in order to save his country and his own soul. During a series of terrifying trials, Simon must encounter the trickery of the deadly Mind Executioner and the secret dealings of those he ought to trust.
The Gifting is an Awesome Indies novel, and is showcased at the Awesome Indies website.
Reviews:
"The Gifting is a unique fantasy where mental and physical worlds merge in a flight of unrestrained imagination. Unlike much fantasy I've read lately, this book soars with hope. It's a story of redemption gained through a mystical journey through earth, air, fire and water that tests the deepest recesses of a man's soul." (Awesome Indies Reviews)
"The Gifting is merely the introduction to the Gathandrian Trilogy; it's a big world, filled with intrigues and magic, loss and redemption. It's a fantastical place where almost anything is possible, where a coward can become a hero, where the promise for more excitement and enchantment are guaranteed, and I look forward to seeing where Anne Brooke will take us next, as well as discovering what Simon's future holds." (Top2Bottom Reviews)
The romance between Simon and Ralph is a difficult one, and very slow-burn over the trilogy, so watch out for the follow-up, Hallsfoot's Battle, later in the summer, and the finale, The Executioner's Cane, coming in the autumn. Happy reading!

And published today is gay thriller, The Bones of Summer, the sequel to Maloney's Law. You can pick up your copy at a first-week discount price at Amber Allure Press, and also at All Romance Ebooks.
Here's the blurb:

When Craig Robertson's religious fanatic father disappears, Craig is forced to return to the home he left behind after an underage affair in order to look for answers. He takes with him his new lover, private investigator Paul Maloney, who is more than willing to help solve the mystery.
The search soon becomes an investigation into Craig's past, and, because of distressing gaps in his memory, he's terrified of the truths he might find. As Craig's obsession with uncovering clues grows, his fragile relationship with Paul begins to disintegrate. Haunted and stalked, Craig has to face down the horror of his memories if he wants to have any hope of a future at all.

The Bones of Summer was awarded third place in the inaugural 2009 Rainbow Mystery Fiction Awards, and was also Commended in the Annual Writers' Conference Novel Competition 2008.
Speaking of Maloney's Law, it gained a 5 star review at Goodreads this week, which said:
"It was very enthralling to read about his [Maloney's] obsession/amour fou and how this develops intertwined with the crime plot."

Not to be outdone, gay romantic comedy Who Moved My Holepunch?received a 5-star review at Goodreads, and a 4-star review at Amazon US. The Goodreads review called it a "gorgeously funny story" and the Amazon review considered it to be "smart and funny erotica". That's certainly put a smile on my face - many thanks, both.
Meanwhile, biblical short story collection The Betrayal of Birds was briefly at No 82 in the Amazon US Christian Short Story charts, so that was jolly nice too.
Life News: 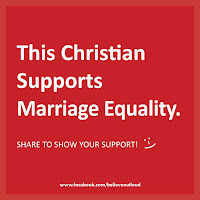 The vitally important news of this week is that the Equal Marriage Bill will be debated in the House of Lords on Monday and Tuesday coming. Once again the Church of England House of Bishops is very high-handedly stating publicly that we as a Church don't support it. Well, excuse me, but I don't believe the House of Bishops has ever had the humility actually to consult the silent presence in their pews over what we believe and long for, so right back at them, I say this: I one-hundred percent support the Equal Marriage Bill precisely because I'm a Christian, and not in any way in spite of it, so put that in your pipes (or indeed elsewhere) and smoke it. After all, you, dear Bishops, messed up the women bishops vote, so you've long since lost my trust, really. I don't credit a single word you say, and I don't think God does much, either. Harrumph!
Anyway, there's going to be an Equal Marriage Rally in Westminster tomorrow evening from 5.30pm onwards, and I am going to be there, as a straight Christian supporting justice, equality and simple common sense. I hope others of you out there of like mind will perhaps feel able to join me. I'm not convinced the House of Lords will do the right thing (does it ever?) but I want to make my small stand as best I can. With this in mind, I have also sent the House of Lords an email, which I hope they might ponder over for a least a few seconds. It said this:
"I understand the discussion about the Equal Marriage bill is happening in the House of Lords next week, and as a Christian and Church of England attender, I would somehow like to convey my support of and belief in this very important bill.
It saddens and angers me when the media and indeed the House of Bishops themselves produce statements which say that all Christians are against equal marriage - well, not in my name as, on the contrary, I believe in it precisely because I am a Christian.

I would love to think that in my lifetime people of the same gender who are adult and love each other could also make the same wonderful commitment to each other in marriage that I have had the benefit and joy of for the last 20 years. I hope therefore that someone in the House of Lords might be willing to speak for the bill, and the desire and will of the majority of the British people, and indeed some of the Christians in this country too.

In other news, the horses have returned to the field at the back of our garden for their summer (which is lovely) and they have a new foal. 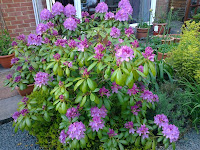 And the garden is also looking good, with the second rhododendron now fully in bloom, hurrah. The third one isn't too far behind either. Speaking of the garden, we spent a wonderful morning yesterday at the Crocus Nursery buying lots of goodies from their post-Chelsea Flower Show sale. So we now have an orange poppy, a pink peony, an orange euphorbia and three really tall and totally fabulous Irises which I am now in love with. Amongst other delights. I've now planted them all out and even potted on the dahlias so feel very smug.
Yesterday's cake was Chocolate Gooey Cake, which was all going swimmingly until I tried to get it out of the tin and it broke into 5 pieces. Disaster and weeping in the shires, I can tell you! Still, I've wedged it together as best I can and hope it won't taste too bad when we tackle it this evening.
Oh, and church this morning was actually very enjoyable - which I wasn't expecting at all, being the Gold Medal Cynical Christian of The Year (for several years running, actually) - but I fear we, as a small country church, are somewhat outclassed by the evident skills of our new organist. We'll have to up our game, for sure! Interestingly, after the service one of the church ladies asked if we were on the electoral roll (we came off it in March for spiritual and political reasons). I said we weren't. She asked if we would like to be on it, and I said no thank you, but thank you for asking. She looked rather bemused, but didn't ask why not, which was a shame as my answer was all prepared too. If anyone's interested out there, it's this: we enjoy coming to worship God in our local church, but we don't actually want to be an official part of a larger organisation which is self-evidently both homophobic and misogynistic. Which no doubt makes me a hypocrite, but really I'm doing the best I can. Hey ho.
Anne Brooke
The Gifting: gay fantasy romance
Gay Reads UK
Biblical Fiction UK
Lori Olding Children's Author
Posted by Anne Brooke at 1:47 PM