My epic gay-themed fantasy series The Gathandrian Trilogy now has its own Facebook page, and many thanks to those who've already joined up. All visitors more than welcome, and don't forget all the books are FREE.

The first in the series, The Gifting, can be downloaded for free at a wide variety of online book retailers, the newest of which is Obooko Books and Free Ebooks websites. So far in total (as far as I can tell, or am told), about 200 readers have already downloaded it, so I hope at least some of them are enjoying the read.

Meanwhile the second in the series, Hallsfoot's Battle, is due out in July and will also be a free book. As you can see, the cover art is now chosen and I'm very happy indeed with it. This one concentrates more on the story of Annyeke Hallsfoot, the kick-ass redheaded (hmm, wonder where I get that from, eh ...) new Acting Elder of the Gathandrian city, although the ongoing rollercoaster saga of Simon and Ralph is not overlooked at all. Here's the blurb:

Gelahn the Mind Executioner begins his battle campaign. His powers are unmatched - even without the mind-cane in his possession - and next he will break and possess Ralph Tregannon the Lammas Overlord. Recently appointed Acting Elder and left in sole charge of her people, Annyeke Hallsfoot draws on all her mind-skills and courage as the fight for Gathandria rages. The precious ancient legends are her bedrock and she begins teaching their wisdom to the scribe, Simon Hartstongue, who must quickly learn to work with the mind-cane's strange powers.  But Simon is distracted by his own demons and only fears the artefact, so Annyeke must plot a desperate strategy to defeat the enemy. As the Gathandrians rally behind their new leader, Gelahn strikes at the very heart of the city.

Keeping to the subject of free books, my Christian novella The Prayer Seeker is now FREE at Smashwords and Omnilit Books. So far it's been downloaded about 80 times, which is nice. Here's the blurb:

Michael Woodthorpe hasn’t attended church for many years, not since his time as an evangelical in his early twenties. One winter he decides to take early retirement in order to search for the God he used to know.
As he comes to terms with his new existence, he must face opposition from both his ex-girlfriend, and his ex-wife, whom he hasn’t seen for many years. Meanwhile, he begins a series of religious encounters with a spiritual director and slowly discovers the riches of prayer. When his journey brings him face to face with the mistakes in the past which had made him walk away from God, he must find a way to resolve them if he is to fulfil his God-given potential at all.

In other book news, I am offering three free ebooks of gay thriller Maloney's Law in a BookLikes giveaway competition, so enter now to avoid disappointment! The competition ends on 5 July. Maloney's Law has just gained two new 4-star reviews at Goodreads, one from Lorraine, and one from Tricia who says:

"A thriller, a mystery, a tragedy, and a romance in only a dark sense. Totally worth the read and impossible to put down. New author for me, I will be looking for more titles from Anne Brooke."

In addition, Maloney's Law gained a 4.5 star review at Top2Bottom Reviews which included the following:

"Once you get into this book it's impossible to put it down. Every time you think you have it figured out, it proves you wrong. In other words it's the perfect detective book! The characters were very strong and the backstory couldn't have been better."

Goodness, many thanks indeed to all these readers and reviewers. Not to be outdone, The Bones of Summer (Maloney *2) is now available as a paperback at Amazon US. It has also this week gained a 4-star review at Goodreads (many thanks again, Lorraine).

"Once again Anne Brooke has pulled off an emotional winning read in so few pages. Her talent for capturing human emotions, kink, and flawed characters never ceases to amaze me … The ending is bittersweet but it felt right and I am happy with it (satisfied). If this is the kind of read Wilde City Press is pushing out, then I am so on board. The Beginning of Knowledge is another winner by the queen of shorts, Ms Anne Brooke."

Well gosh, thank you. Gay romantic comedy Who Moved My Holepunch? received a 5-star review at Amazon US, and also free gay poetry anthology Falling Awake was given 5 stars at The Novel Approach Reviews, who say:

"Each piece is but a small window through which the reader is able to catch a glimpse of the authors' creative talents, each piece telling a story - a beginning, middle, and end - in all the rich tones of a free-form and lyrical language …Falling Awake, in some ways, reads like flash fiction that has been structured with a cadence and rhythm all its own." 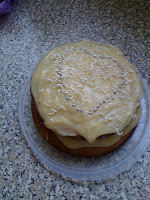 This week's cake was a disaster, my dears, a disaster. Though thankfully, the lovely K managed to salvage it with the icing I'd left him to cope with when I went off to help out at the University open day. It's supposed to be White Chocolate Coffee Gateau but I have renamed it (thank you, Karen!) to White Chocolate Coffee Terror Gateau. It surely has one of the most complicated recipes known to humankind - some of which involves heating two different sets of substances at the same time whilst whisking one of them with an electric whisk. Arrgghhh!! Who creates such torture?? They should be stopped at once.

Suffice it to say that K appeared in the kitchen at exactly the right time to point out that I was managing to melt the electric lead in the gas flame and some of the bits were dripping into the mixture. Oh hell. It's astonishing we're all still alive and in one piece really. Though I like to think the wiring added extra protein to the cake. I also think I baked it too long (well, I was frightened to bring it out in case it turned against me, my dears) and it has basically turned into biscuit wrapped in custard (ie that icing). But what the hell - we're English and we'll eat the dang thing if it kills us. It's the Empire spirit, don't you know.

Anyway, thank goodness for the garden to make everything calm again and the joys - today - of coffee, juice, croissants and pain au chocolat on the patio for breakfast. True bliss.

So here are sweetpeas fresh from the garden, clematis, lilies, the petunia and pansy bed, the rose garden, the trellis roses and the lychnis. 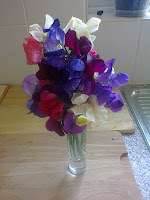 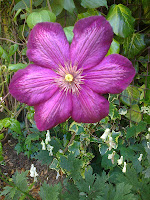 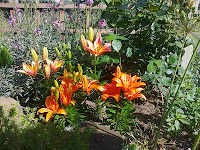 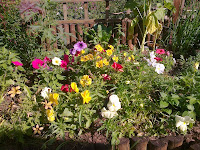 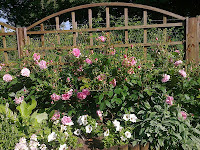 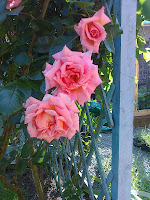 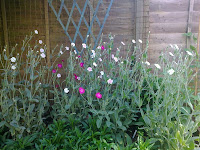