Epic gay fantasy The Gifting is now available in all formats at Smashwords and Omnilit Books (where you can also read through the first chapter) at the bargain price of only $0.99 or 65p. Here's a quick reminder of the blurb together with a couple of reviews it's garnered in its previous life:

Simon Hartstongue is a mind-reader, and branded a coward and a murderer. When his overlord and lover Ralph Tregannon turns against him, he is forced to embark on a treacherous journey to the distant and magical land of Gathandria in order to save his country and his own soul. During a series of terrifying trials, Simon must encounter the trickery of the deadly Mind Executioner and the secret dealings of those he ought to trust.

"The Gifting is a unique fantasy where mental and physical worlds merge in a flight of unrestrained imagination. Unlike much fantasy I've read lately, this book soars with hope. It's a story of redemption gained through a mystical journey through earth, air, fire and water that tests the deepest recesses of a man's soul." (Awesome Indies Reviews)"The Gifting is merely the introduction to the Gathandrian Trilogy; it's a big world, filled with intrigues and magic, loss and redemption. It's a fantastical place where almost anything is possible, where a coward can become a hero, where the promise for more excitement and enchantment are guaranteed, and I look forward to seeing where Anne Brooke will take us next, as well as discovering what Simon's future holds." (Top2Bottom Reviews)

It's quite interesting that in the two years this book was with a small publisher, it managed to sell the grand total of 20 copies, even with being showcased by the Awesome Indies website (see above review comments) - but now I've self published it, I've sold 16 copies in the first week. Not bad going really. A lesson to ponder on, that's for sure!

Gay mystery The Bones of Summer (Maloney *2) is also featured over at the Amber Allure Blog, so do feel free to pop in for a visit at any time.

And as June is Pride Month, all my gay titles have a 25% discount at Amber Allure Press, and my lesbian titles carry a 30% discount at Untreed Reads for the whole month. Happy shopping! 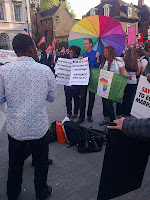 The Anglican leadership has been playing silly devils with us all again (surprise, surprise ...) over the issue of equal marriage. I was immensely proud to take part in the Equal Marriage Rally outside the House of Lords on Monday, and only wish I'd had a flag to wave during the event. Or even a jazzy umbrella like the one Peter Tatchell is holding in the picture.

So I was utterly thrilled when the bill passed through the House of Lords with such a strong majority - and not all all surprised (though deeply angered and ashamed) when of the 14 Anglican Bishops present in the House on the occasion, 9 voted against the Bill and 5 abstained (even those who'd spoken for it). However it was lovely to realise that, by the grace of God, the Lords are thankfully well able to save us from the spiritual cowardice of the Bishops.

Anyway, as a result, I wrote an open letter to the Archbishop afterwards, as he'd made some stupid, hurtful and very crass comments during his speech, a letter which I have put on my Angry Anglican blog. I doubt the Church of England is listening, but I wanted to have my say. I've also been highly amused most recently by the fact that the Church of England is now saying that it will "graciously concede defeat" and work towards supporting the Equal Marriage Bill (even though they were actually rather ignominiously defeated by the majority of opinion against them, and really have a decent amount of egg on their faces right now). But Lord preserve us!! The last thing we folk want is that mealy-mouthed bunch of bishops getting their hands on a perfectly good Bill. Please God they don't manage to mess it up as much as they messed up the Women Bishops vote. Perhaps we can somehow distract them with some other crisis - say, sex abuse and bullying in the church, for instance - while reasonable people get on with the task of bringing God's kingdom to earth? It's the only way, I fear ...

Mind you, I have been highly amused by this article on the possibility of the Archbishop setting up fertility clinics for engaged couples, if he's so keen on peopling the nation. Now that would be truly wonderful! And would at least give the wretched man something useful to do, hey ho.

Turning to happier news, I was rather startled to be greeted by my lovely neighbour, L, earlier in the week as I returned home from work - who simply couldn't wait to tell me that after weeks of thorough searching, she'd finally got THE perfect 50th birthday present for me later on this month. I whooped with joy and delight and danced round the car for a bit with her, as one does - and then asked if it could keep for a year, as actually I'm 49 this month as I'm a 1964 baby. Oh no!! Apparently it can't keep and I have traumatised the neighbours by not being old enough, alas. However, after some hysterical giggling, we have agreed that I will officially be 50 this year and 49 next - so problem solved. I can't wait to see what the present is either.

June indeed must be here at last, as the first of our roses is fully in bloom, and there are loads of buds on the others, which is hopeful. I look forward to a riot of colour and scent in the next few weeks, deer willing, of course. 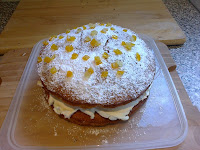 Finally, yesterday's cake was Lemon Cake, which is one of the easiest recipes I have and tastes really lovely. Thank goodness I have a new electric whisk which works like a dream, hurrah.