Still no news from the elusive Eternal Press/Damnation Press about the rights recovery letter they owe me. Not that it surprises me much as it took them 5 months to respond to my first email, so I'm not holding my breath. I do, however, take note that when I posted yet another query, this time on Facebook, and linked my plea to their CEO, the equally elusive Kim Richards, it didn't take her long at all to block me and remove my post from my page. So at least we know Kim is still alive out there somewhere, hey ho.

No matter, as I added the message to my fan page instead, and now just on 900 people have seen it. Might have been easier for the lovely Kim to simply send me the rights recovery letter in the first place, rather than to have all this extra publicity, but people should certainly be allowed to respond as they wish, naturally. In the meantime, I've now posted a comment on her blog (which, astonishingly is still there at the moment of typing, but for how long - who knows!), just to see if I can make any kind of contact with "the other side". Go on, Kim - write that letter! You know you want to, really, and at least it'll mean you'll get rid of me. Besides, I'm not actually that scary, so you don't have to hide, as you've done on Facebook ...

However, more positive news about this situation is that Preditors and Editors have added my unfortunate and continuing experience to their apparently growing database on problems associated with this particular publisher, so will continue to advise writers against them. Hurrah indeed.

Meanwhile, gay thriller The Bones of Summer (Maloney *2) is due out from Amber Allure Press on 2 June, so I'm very much looking forward to that.

And, speaking of Maloney, the first in the series, Maloney's Law, is now out in paperback at Amazon US, so do feel free to pop a copy in your online basket when you're next shopping. Thank you.

I'm also happy to say that this week, I've received two reviews for gay comedy, Who Moved My Holepunch? The first is from Rainbow Book Reviews, who comment:

"If you're wondering how moving a holepunch can possibly lead to an exciting story, you're not the only one. When I saw this book for the first time, I thought the same thing. So, I picked up the book, so to speak, and read with great interest what wonderfully quirky characters Anne Brooke has come up with now. With that title the situation was promising from the very start. And, let me tell you, I wasn't disappointed … If you like stories with a touch of humor, if you enjoy reading about quirky, somewhat unusual characters, and if you're looking for a hot read that contains just a touch of kink and a lot of office sex, you will probably like this book."

And the second review is from Joyfully Jay Reviews, who says:

"Who Moved My Holepunch? First of all, what a great title for a book. I'm not sure if I would've been so compelled to read it had I not seen the catchy title and cover. For this, I must say thank you, Anne Brooke. I figured, if anything, I'd be getting a story outside of the norm and I have to say that was true. Who Moved My Holepunch? was a quirky little madcap adventure within the framework of a budding workplace romance."

Many thanks, both, for reading and reviewing!

When University administrator Alan Castleton meets temporary worker and talented pianist Luke Milton, he doesn’t expect to become obsessed with the handsome young blond. But soon he is heavily involved in a passionate and angry affair, and exploring the dark shadows of his own personality in a way he’s never encountered before.
The more Alan tries to break free from his obsession, the deeper it entangles him. The dangerous split between his reason and his sexual desires threatens his peace of mind and, when the crisis point comes, he must decide once and for all the kind of life he should lead.

I for one can't wait. The week ahead is certainly going to be fun, that's for sure. 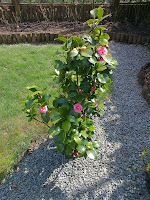 Lots of excitement in the garden this week, as spring really settles in. I've planted out our Mrs Bradshaw geums, and the spare heucheras we had lurking in the vegetable patch so at least they all have a home now. Plus our camellia is also fully in bloom, as are our gorgeous red tulips in the back garden. Fabulous. 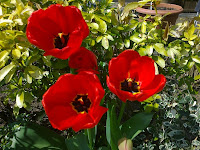 I've also been busy in the kitchen (I'm such a Domestic Goddess, you know ...) and made a Cappuccino Coffee Cake. Which tastes pretty good, I have to say, though I appear to have broken my electric food mixer in the process (how? How?!) and had to resort to the faithful standby of Husband Food Mixer in the last ten minutes. What a hero, eh. 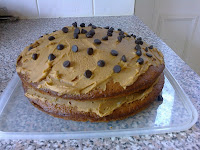 K and I have also booked our 3D (3D!!! How alluring we will look ...) Star Trek Into Darkness tickets for the first time, and I'm wondering if I can take my Klingon Guide to Tourism dictionary ("Buy or die") along for an airing. Hmm, probably not, but a girl can dream.

I also have to say I was really disappointed by the ending of Broadchurch - what rot, we say. All highly unlikely, so a plot with more holes in than a Swiss cheese, but the acting was spot-on and deeply alluring, and made the whole laughable journey somehow worthwhile. Hey ho.

And, over at The Angry Anglican, I take a much needed break from Anglican Leadership Homophobia World (AKA The Church of England) and find respite (phew!) with the local URC church ...

Oh that Kim and those nasty folk need a good slap round the face with a wet kipper and then some.....

I just nearly died when looking at your cake, ohhhh what joy it is to behold....I'm literally salivating like a starving man in a desert with a mirage of fourteen cake shops and a chippy on the horizon!

Kinky beast! :)) Those kippers have a lot to answer for, you know!

And you mean you never received the slice I sent you??! I'm having a word with that postie right now!