Sigh. Here we go again. I'm having enormous trouble getting the Rights Recovery letter for my literary short story Painting from Life back from Eternal Press/Damnation Books. Last year they removed it from their website without telling me, and then when I asked for the return of copyright in October 2012, they either ignored me or emailed back saying they were "working on it". They've been "working on it" ever since and in March I actually received an email from Kim Richards, the CEO, saying she was planning to send me the RR letter in two weeks' time. Well, two weeks came and went, and still nothing.

So it gives me great and heartfelt pleasure to see that Eternal Press and Damnation Books are both mentioned on Preditors and Editors as a Publisher To Avoid. Heck, wish I'd known that a while back - might at least have saved myself all those emails I've been sending. Still, I've sent more information to Preditors and Editors so they can add my sorry tale to their information on this particular company. Are you out there, Kim? I quite understand your organisation is noted as being rather dodgy but if you need something to draft a letter on in the midst of your troubles, I'm happy to send you a typewriter ... Fellow writers out there - be warned!

Turning to more cheerful writing matters, I've found a review of gay science fiction story Tuluscan Six and the Time Circle at ARe Cafe Reviews. It included the following:

"Tuluscan Six and the Time Circle by Anne Brooke is a short story with a light comic touch that may appeal to many readers, even those who tend to avoid science-fiction. The fast pace, comical details, and the single viewpoint from an appealing hero make for an immediately engaging reading experience."

Also at ARe Cafe was a lovely 4-star review of gay thriller A Dangerous Man, which included the following:

A Dangerous Man is not a gay romance with a traditional happy ending, but it is a compelling work of gay fiction and a real page-turner. Things to praise include the flawless writing and the subtlety with which Michael's tragic past is revealed. The London setting is vivid and three-dimensional, and the author has a perfect ear for dialogue.

I'm also very happy to announce that my author page is now up at new gay fiction publisher Wilde City Press. While you're there, have a good look round the site, and I hope you enjoy the visit. My story with them will be published in May and I hope to let you know the details very soon.

Meanwhile, the FREE giveaway of fantasy novel Hallsfoot's Battle is still on over at Goodreads until 23 April, so don't miss out. As a reminder, here's the blurb for you:

"In the second book in The Gathandrian Trilogy, Gelahn the mind-executioner begins his campaign. His powers are sublime, unmatched – even without the mind-cane in his possession. Using fear and pain he enslaves his victims, but next he will break and possess the Lammas Overlord.
Recently appointed Acting Elder and left in sole charge of her people, Annyeke Hallsfoot draws on all her mind-skills and courage as the fight for Gathandria rages. The precious ancient Legends are her bedrock and she begins teaching their wisdom to the scribe, Simon Hartstongue, who must quickly learn to work with the mind-cane’s strange powers. But Simon is distracted by his own demons and only fears the artefact. Supported by Johan and Talus, her young charge, Annyeke plots a desperate strategy to defeat the enemy.
As the Gathandrians rally behind their new leader, Gelahn strikes at the heart of the city."

It includes one rather tricky gay couple, a feisty redhead and an obstinate raven, so what more can you want? Good luck with the competition.

On another writing tack, children's fantasy story The Origami Nun now has its own video on YouTube, so do pop along and enjoy at any time.

This week, the reduction of my Happy Pills has hit home for the first time, and it's all proving harder than I thought. Felt very depressed mid-week and couldn't seem to do or think anything at my usual speeds. Possibly that may be a good thing, however, as I tend to live life at full throttle. So have spent a lot of spare time napping and am feeling a bit more normal now, phew.

Also in the week, I watched my recording of Maggie Thatcher's funeral, which made me both rather sad and also immensely pleased at how well done it was. It was also good to see so many people out supporting and sending her on her last great journey - rather than the national bitchiness and downright misogyny that's been taking over our social networking and media for the last week or so. I have to say that hearing so many times about how Maggie was so terrible because she was so divisive has made me smile though. Um, isn't being divisive what good leadership is all about?? It was that terrible consensus and trying to agree with everyone that got us into the s**t in 1979 anyway, for those of us who remember those dreadful days prior to Maggie turning up and sorting out the mess. She was simply the right woman for the right time, and I'll not forget it. 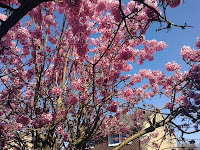 This weekend, spring has also really sprung, hurrah. We heard our first cuckoo of the year, and our apple blossom and dwarf tulips are now in all their full glory.

I've also made Double Chocolate Mint Sponge cake, which was terribly easy and tastes divine. Will definitely be making this one again. 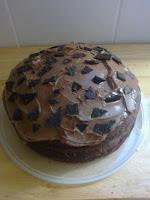 And yesterday we had a glorious day at Petworth House, followed by a trip to Rake Garden Centre - which is always worth a visit and where they had a sale of tulips so we went a bit mad really. But you can never have too many tulips, to my mind. So a lot of planting has been done in the glorious sunshine we've had.

Meanwhile, over at The Angry Anglican, I put the case to you, folks, that despite what the Church of England would have us believe, gay marriage is actually God's great plan after all. Is the CofE listening though? Hmm, I doubt it ...

So, because of the fact that K and I are fed up to the back teeth with Anglican Leadership Homophobia World, we took a week off from battling the beast, albeit quietly, and attended our local United Reformed Church service instead. Very nice it was too - we'll be going again for sure.