Seed cake and the fallen woman

I'm happy to say that the publication date for The Delaneys, My Parents and Me, the last in the gay menage Delaneys series, has been brought forward and it will now be available from 3 March. Moreover, later in the summer a paperback collection of all six stories (you lucky people, you!...) will be made available. The working title for that is The Dangerous Delaneys and Me: the Collection, and further details will appear in due course.

To keep you going till then, my literary lesbian short story, A Woman like The Sea, has a Valentine special 15% discount direct from Untreed Reads until 15 February. Buy now to avoid the rush.

I'm also pleased that, after a spate of 1-star reviews from people who found it "horrid" and the "worst book ever read" (Gawd bless 'em, and I honestly feel quite proud!...), my biblical short story, Dancing with Lions, has gained another 5-star review at Amazon US, where the reader in question said:

Gosh indeedy. What a contrast.

I have now gone all the way through my Keyboard Playing for Beginners book once, and have started going through it again to see if it makes any more sense and is becoming more do-able. The good news is it does seem to be coming slightly more easily to the fingers (as it were), though some of the chords are giving me pause for thought. Can one's fingers really ever be in that position? I'm not sure people are built like that ... But much-needed encouragement from the Internet world is getting me back in my keyboard seat and I'm going to keep practising - though I suggest that there's no need to buy those concert tickets just yet. 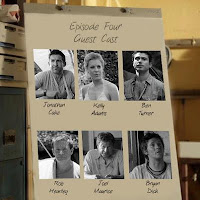 Other lovely news is that my neighbour's son, Rob Heanley (bottom left of pic), was in Death in Paradise last week, and it was very exciting indeed to catch a few glimpses of him at the start of it all, and later in flashback. My, what fun. And if you are going to get a small part in an ongoing series, you couldn't do better than choosing one filmed in a Caribbean Island. Well done, Rob!

Earlier in the week, I (literally) came a cropper when I attempted to sneak out of bed early in the morning without waking my beloved husband. This involved not turning the landing light on (as we have a glass panel above the bedroom door) and making my way by feel. Somehow I got utterly disorientated and manage to perform several illegal ballet manoeuvres down the first flight of stairs before landing in a heap. Ah, the spirit is willing but the flesh is incredibly noisy when rebounding off a wall or two. And he was certainly awake then ... Astonishingly, I managed to keep firm hold on my handbag all the way through so feel that my credentials as a bona-fide woman are now beyond question. Anyway, no harm done, though my hip is rather bruised, and the pattern it's formed would make a great tattoo, if I ever had the courage to add extra pain into my action-packed schedule.

This weekend, I have made seed cake, just like Grandma used to make - but, I have to admit it, far nicer, actually. Especially when it's fresh out of the oven. No pictures today, as it doesn't look very exciting, but the taste is pretty damn good, hurrah. Candied peel and carraway seeds - the hot ticket to bliss.

K and I also managed a trip to Wisley and admired their snowdrops, daffodils and crocuses, amongst other early spring plants. Sadly, the queue into the Butterflies in the Glasshouse event was over one-hour long so we gave it a miss. However, we've seen it before and I made up for it by having a Butterfly Cake as part of my lunch, so honour was satisfied. Back in our own garden, the honeysuckle is now in bloom, there's more blossom on the daphne tree and some of our aliums are coming up, well gosh.

As an utter contrast, over at The Angry Anglican, I take a look at same-sex marriage with just a touch of satanism (in the best possible taste). And there's Stop Press News: You'll be pleased to hear that the Church of England has taken the full opportunity of this important upcoming vote to look even more ridiculous than it currently does, thus fulfilling all our expectations, and distancing many more people from its centre, including myself. But the Angry Anglican will blog more fully about this later in the week ... Be afraid, be very afraid.

Guess who is a) glad my lads are coming to me a little earlier and b) will want them in paerback? That would be me :)