I'm thrilled with the book cover for my upcoming gay office romance, Who Moved My Holepunch? It's absolutely perfect for the story, which will be published on 24 March. Always good to have something in the spring to look forward to, eh.

Speaking of which, the cover for the last of the gay menage Delaneys series has now come through. Delaneys No 6 is called The Delaneys, My Parents and Me, and will be published on 17 March. That'll be a busy and exciting month for sure.

I'm also pleased to say that fantasy novel The Gifting now has its own BookPulse page, so I'm hoping it makes some new friends there.

Yesterday, I had a great time at the Elstead Writers Group and I for one can't wait till next month's meeting. And, talking of meetings, the UK GLBTQ Conference 2013 group now has its own Goodreads page, so do come along and say hello to us all there, and find out more about our July weekend. It's going to be amazing, I promise you.

My lovely husband has repainted our dining room this week - it was previously a colour we can only describe as Prison Cell Grey, and it's now a lovely pale pink and really warms the whole room up. I love it. Moreover, in his mission to achieve sainthood, K also took advantage of the 2 hour nap I just had to have yesterday (well, I was tired, you know, and I'm very delicate. Honest ...) and secretly did the weekly clean by himself. Except for the Hoovering, which he did only after I woke up. I'm expecting the letter of confirmation of glory from the Pope any day now.

Mind you, I have done the ironing, so I'm not really useless in my own home. Not utterly anyway.

Meanwhile, this week, I have struggled with the concept of watches. I've bought 2 cheap ones from Amazon over the last few months and they've both died on me, as well as the straps wearing down. And I absolutely have to wear a watch as I'm obsessed with knowing the time - I feel lost in the universe if I don't know it, sad to say. Anyway, I decided to push the metaphorical boat out and buy a more expensive watch from good old Amazon with a bracelet strap that won't wear down. All very well and good, but I'd forgotten my stick-thin wrists, and it's rather too big for me. Oh well. At least I know the time, even though I can't always tell where on my wrist it is.

Yesterday, we celebrated the departure of the dreaded snow (at last - hurrah!) by tidying up the garden so K and I are both now feeling supremely smug, as there's nothing we need to do in it until February. Which of course is next week, so only a few days' grace. 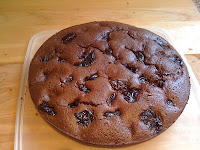 I also made a Chocolate and Prune Torte which seems to have survived my ministrations very well, and we're both happy with the results. Heck, I can do posh! Whatever next?

And K and I have both been deeply moved by the tale of the Lost Sheep of Heathfield. I'm sure there's a parable there somewhere though I have to admit that if some farmer turned up to collect the sheep I'd been looking after unexpectedly on his behalf, I'd want a damn sight more than a miserly bunch of flowers. Hey ho.

Over at The Angry Anglican, I believe it's just about time for the tide in the increasingly wilted Church of England to start turning. When oh when will we start to be a prophetic voice for the world? Don't wait up, eh.

Finally, I know this is a lone voice crying in the wilderness (once one has these biblical analogies, it's really tough to let them go ...) but I have to say I do find Brian Cox the most irritating man on TV right now. He's just so infuriatingly smug that I can't listen at all to whatever words of knowledge he's trying to impart to me. I just want to push his face in a bowl of lukewarm custard and have done with it. Yes, I am a really bad person, but at least I'm a dab hand at custard. Every cloud, as they say ...