It's Novel City here in the outback at the moment, I'm happy to say. I've now signed the contract for Musa Publishing to republish my chick lit novel Pink Champagne and Apple Juice, and that is scheduled in for 6 September. No cover yet, but I'm looking forward to seeing how that looks.

In the meantime, I do have a cover for bisexual thriller Thorn in The Flesh, which will be republished later this year by Untreed Reads. I'm really very pleased with it, I must say.

I've also signed off the proof version of fantasy novel Hallsfoot's Battle (Gathandria *2), so Bluewood Publishing should be advising a publication date in the near future. Watch this space.

There've also been a couple of very nice reviews of other work this week. Gay thriller A Dangerous Man received a 4-star review at Goodreads, which included the following:

"A Dangerous Man is not a gay romance with a traditional happy ending, but it is a compelling work of gay fiction and a real page-turner. Things to praise include the flawless writing and the subtlety with which Michael's tragic past is revealed. The London setting is vivid and three-dimensional, and the author has a perfect ear for dialogue."

And gay short story Where You Hurt The Most also gained a review at Goodreads. Part of that review said:

"Anne Brooke always impresses me. I quite literally love her writing. There’s a sophistication and refinement to the clean, sparse prose that sets her apart ... Overall I’m pretty pleased with this short story due to the excellent writing, drama without being overwhelmingly intense, and engaging characters. The themes of pain, need, and longing are woven into the story in many different ways and skilfully deployed to add depth and nuance to even this short length. I’m pretty impressed with the level of skill displayed, but honestly I know to expect that from this author. I’d easily recommend this to newcomers and fans alike."

Gosh, many thanks indeed to both reviewers for your comments!

A rather snowy few days here recently, which meant my game of golf on Friday was one of the coldest I've ever experienced. Didn't do much for my play either, but really the least said, the better ... The weather certainly put paid to my weekend plans of getting out into the garden and seeing what it was up to, though I did manage to buy a couple of new house plants while we were out and about.

Plus we've also given the garden bridge a fresh lick of paint as it's been looking rather shabby lately. I fear it will need quite a few extra coats too before it's ready to take its place in the garden again. Next DIY stop: the love seat - but only when the weather's better, as it's too heavy to move. 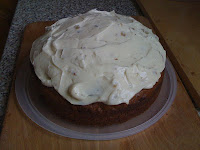 This week's cake has been Carrot and Mascarpone cake, and we're very happy indeed with the results. How I love a recipe where you just throw all the ingredients into a big bowl and mix them. Saves all that faffing around, you know.

Finally over at The Angry Anglican, I discover women are really and truly the secret weapon after all.