Murder and mystery with just a hint of Ketchup 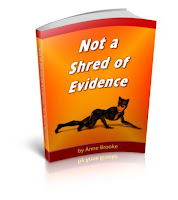 This week I've taken a big step and published one of my books directly to the Kindle. It's a screwball crime comedy set in an office and featuring cat-suited, vermilion-nailed heroine, Fallon Evans. Actually I can't tell you her full name as it's quite rude, but all is revealed in the book, I promise! It's called Not a Shred of Evidence, and the blurb is:

When secretary and would-be detective Fallon Evans slaps on her best Office Hag smile for another kick-ass day at Grabbit, Nickett and Leggatt, she doesn't expect a tormented boss or a murdered Chief Executive Officer. However, the office is a ruthless place, and Fallon must navigate the obstacles she faces armed only with her trusty leopard print catsuit, her vermilion nails and her attitude.

When she discovers a bottle of Heinz Tomato Ketchup next to the corpse of the CEO, she knows something sinister is afoot. Can she solve the impenetrable mystery, mend the shredder and be in with a chance of gaining that longed-for pay rise at all?

Here's the beginning for you:

The office is a mysterious place, full of sound and fury. Yes, it is. And we all fear it. Though some, the lucky ones, survive it. You don’t agree? Then let me tell you my story. Afterwards you can judge for yourself.
I’d been working as Support Hag In Training – a title that was never shortened – for Grabbit, Nickett and Leggatt Customer Service Consultants for two months but already I knew it was a job which might bring me hours of unadulterated pain, lightened only by the occasional sandwich or trip to the Ladies. At such times, much like the casual viewer of EastEnders, I would turn my back to the shouting and dream of better things. Some things can only be endured, but they bring a peculiar feeling of pleasure.
That day started out like any other. I’d come in ten minutes late, sweating from the effort of putting one foot in front of another; a Hag’s life was a hard one and they didn’t pay me for my energy levels. In fact they didn’t pay me at all. What with all that sweating, my salary went straight to the dry cleaners. It cut out the middle woman. When, oh when, would they give me a pay rise?
When I opened the office door, I could see my boss was weeping, his head squashed against the keyboard like an overcooked onion, and there were smashed segments of plant pot and half a wilted geranium on the thin grey carpet. Gosh, I thought, why the mess? But as I wasn’t overly fond of flowers, I trod on it on my way to my modern ergonomic workspace, or desk as it was traditionally known. At once the day improved.
‘Morning, Roger,’ I said, but not before ensuring my Morning Hag Smile was in its right place. In the bin. I could always rescue it later, should it be needed. ‘Lovely day.’

The only answer was a moan. Well, sometimes a moan is the most communicative sound bosses produce, apart from the odd groan or peculiar snorting noise, so this wasn’t unusual. I decided to impress him with my cool efficiency and understanding of business process.
‘Er-hem,’ I said, picking up the day diary and flicking through its blank pages, the subsequent cool breeze a boon to my hot skin. ‘Today you’re having a heads-up with the Director of Office Organisational Moves, then you’re touching base with the Head of Electronic Lighting Liaison. Lunch if there’s time and if you still have the will to live, and your afternoon will be spent on the beach head with the Premises and Internal Staff Support division, that is if you ever get them off the beach. You know what they’re like when they spot a sandcastle. Then the school bell will ring and it will all be over. Sound good to you, Rog?’
‘It’s no good, Fallon. It’s all over already, I can’t go on.’
‘Course you can. It’s what you do.’
‘But this time, it’s different. So very different.’
Hmm. Even to me this sounded serious. Roger wasn’t usually this melodramatic, not even when he’d caught his flies in the shredding machine, though only the gods know what his wedding tackle was doing there in the first place. Thank goodness for my trusty first aid experience and the good old stand-by of elevating the limb. But now I could see that whatever was wrong with him would need a lot more than some Arnica gel and a sticking plaster so I retrieved my smile from the bin and slapped it on my face.
‘Oh?’ I said through the wide grin I was now wearing and which was making it difficult to talk. ‘Why?’


If you'd like to find out what happens next (and Fallon and I would be hugely grateful if you do!), you can pop a copy in your basket at Amazon UK for only 79p and at Amazon US for $1.20 or thereabouts. A bargain price for making you smile!

Meanwhile, much to my amazement, it's currently standing at No 12 in the Amazon UK Business Humour charts - can it get any higher? Time will tell ...