Have taken this week off in order to get my holiday days down - as usually I get to the end of the holiday year at work and have to scrabble around to take time off. So K and I have been out and about visiting various gardens and houses, and buying yet more plants to fill the garden with late summer colour. Am also attempting to look for flowers which will take me through autumn, but there don't seem to be many around as yet, oh well. Maybe I should have got some bulbs in and planted them before now? I'm probably sadly too late for the autumn crocuses, sigh... 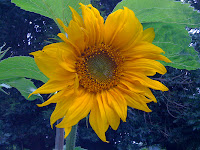 Anyway, my Russian Giant sunflowers are now over 6 feet tall (how do they get so much in such a small seed??) and one of them even has a flower. Result! Plus there are more mauve hibiscus flowers out now so that's very jolly. And the phlox is doing well too - now I've cut a space through the cotoneaster so it can actually see the sun ... That cheered it up no end.

Oh, and the sweetpeas have at last started to blossom, so I brought a bunch in for the dining room yesterday, and the smell is glorious.

Beyond that, I've been a wee bit down really. Saw the doctor yesterday, and we've decided to keep the same level of anti-depressants at the moment, and see how I've doing at the start of October. It makes sense for sure as, money-wise, things might be a bit clearer then.

Plus there are a couple of Bible stories, which might do well, as Dancing with Lions doesn't do too badly, and of course there's my long-suffering novella The Prayer Seeker, but they'll be Numbers 3 and 4 on my self-publishing list. Onward and upward.

Book news for now rather than the future is that children's book The Origami Nun is now out in paperback, and you can even buy it directly from Karabeth Publishing at a 10% discount if you put the code AUG10 at check-out until TOMORROW.

Recently I've been asked about how to buy copies of my ebooks for those of you without Kindles. The good news is that you can also find much of my work on the Nook at Barnes and Noble, hurrah.

I've also finished the first round of edits on fantasy novel Hallsfoot's Battle (Gathandria *2) and returned them to Bluewood, so am looking forward to the next stage of the process. The cover's fantastic too so can't wait until I'm allowed to reveal it to you.

Meanwhile, over at Vulpes Libris Reviews, I find myself rather disappointed with Sophie Hannah's crime novel, The Other Half Lives. And she's usually such a great writer too, oh well. Hope to try something else of hers soon ...

And, goodness me, but I've joined Pinterest. Whatever next, eh! Am enjoying having fun with cover art and pics though.