Sorry I've not been around for a while. After having been ill, I thought I'd take a little break from blogging, and maybe just dip in when I was in the mood. This morning seems to be one of those moments, so here I am, albeit briefly.

I've fully recovered from the nasty illness that just kept on giving for those two weeks, and am feeling (relatively) normal again, hurrah.

Am making my way slowly through the Olympic zone - and trying to avoid it as I'm not a fan of any sport other than golf. It did occur to me at one point that it would be the ultimate in style for the UK not to win any gold medals at all during the games, but sadly that lifestyle statement has been dashed yesterday by our double win. Ah well.

The garden's looking lovely and my Russian sunflowers are now taller than the gate they're next to, and nearly as tall as the canes they're attached to as well. They might even have the beginnings of flowers. You never know. That would be amazing, as they're the ones I planted as seeds. Anyway, here are some garden pics to keep you going. The one with the tall gate is the back garden, with the sunflowers when they were smaller. The bench one is part of the front garden, with the sweet peas in the pot on the right. They're now in flower and smell amazing. The last one is our unexpected hibiscus flower. I love it! 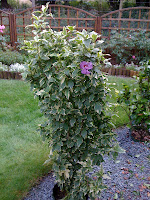 In terms of my book world, I'm busy writing up interviews and a blog post for Riptide Publishing's one-year anniversary later this year, and also have just sorted out my giveaways for the upcoming UK GLBTQ Conference in September. I'm also working away on a short story for Amber Allure, and am giving some small time to a new Lori Olding children's story, Queen of the Fluffy Pens. Talking of Lori, The Origami Nun will be free at Amazon US and Amazon UK from tomorrow (Friday) until Monday, so a good chance to sample the nun's magic, if you've a mind to.

As a result, work on my gay fantasy novella The Taming of The Hawk has slowed down to virtually nothing, but I hope I can pick it up later on. Also I'm very pleased that my upcoming anniversary blog tour for fantasy novel The Gifting only has two empty slots left to fill - result!

Hope you have a great weekend, and I'll pop in again at some point.