Beware: The Diabolical Distorter of Truth

Christian novella The Prayer Seeker has continued to cause a bit of a stir, I must say. It was No 18 in the Amazon CA inspirational fiction charts, briefly, which was nice. And then I felt immensely proud when an Amazon US reviewer labelled it as "beautifully written but terrible theology", going on to describe the pesky book as something which "distorts truth in a most compelling fashion."

Ah, my dears, my job here is done. My theology has always been terrible, naturally, and my position on Heaven's Naughty Step has been assured for some time, so all this isn't news to me. Apparently the terrible theology stems from my main character's experience as a bisexual man who wants to seek forgiveness from a friend he wronged in the past, and my portrayal of the Evangelical Church as being a tad on the rigid side of rigid. Well, hush my mouth, but I used to be an Evangelical so I have personal experience of said attitudes in the past - and apparently, via some of my reviews including this one, in the present also. Ah well, nothing changes. I am more than proud to be an official Truth Distorter. Always play to your strengths is what I say ...

"A Stranger's Touch was a deeply affecting, elegantly written, ethereal wisp of a story. It haunted me."

Meanwhile gay thriller A Dangerous Man is to be republished by Amber Allure on 15 September (hurrah!), and The Bones of Summer (including my hero's religious homophobic father, no less) came in at No 8 in the Amber Allure June bestsellers list, double hurrah.

I also have brand-new cover art for fantasy novel The Executioner's Cane which I will publish as a free book in September or October this year. I do love that cover. I have to say it has a gay romance in it, and a lot about religion, so maybe I should make my Naughty Step a lot more comfortable, as I'm obviously going to be there for a while, hey ho ...

A session of reflexology this week was total bliss, and I definitely must book more appointments at some stage. Another delight was looking out of my window one morning a couple of days ago and watching a deer and her two fawns crossing the field just beyond the back fence. Pure bliss - well as long as they don't get in the garden and eat our flowers, it is ...

Speaking of the garden, here are some recent pics, including a Striped Beauty canna and a potted hydrangea: 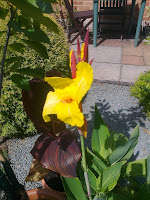 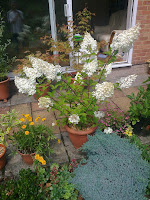 Yesterday, we had a grand afternoon as the Cranleigh Show, and I baked a Chocca Mocha Caramel Cake which has proved very tasty indeed, though definitely a tad rich. 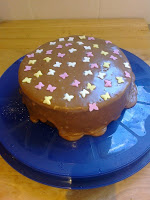 Have a great Sunday.

Oh distort, distort and then distort some more, there is nothing better than a book wrought with passion to report a resort of truth distort(ed)

I'm sure you post your wondrous pictures of cakes just to taunt me away from my healthy eating diet.......oh bugger it, I'm heading to the bakery right now. Yes, not only are you a distorter of truth you are also the instigating influence of cakey consumption!