Gay Christianity and a champagne celebration

Wonderful news about the Equal Marriage bill being passed by the House of Lords and signed into law by the Queen this week - such good news indeed! Well done to the Lords and of course the Queen. The right decision made by all, hurrah.

I've managed to make the most of the continuing heatwave across the country this week, though I am heavily dependent on my trusty portable fan. Phew, it's hot. Here are some garden pics to show just how hot it is. These are: scented pink lilies, a black hollyhock, day lilies, an allium, crocosmia Lucifer, dahlias, poppies and the orchid in bloom. 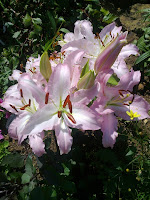 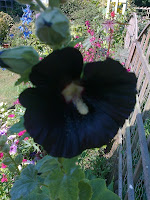 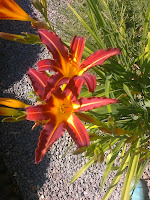 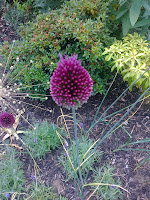 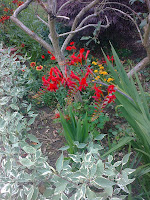 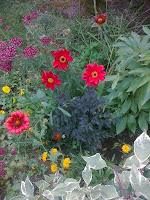 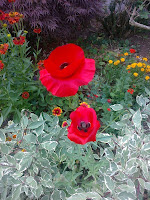 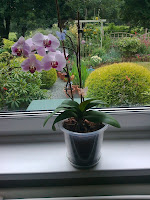 This week I've also played golf with M. and actually won for the first time in absolutely ages, well gosh. I got a par too, which was the icing on the cake, golly hurrah. I've also had a lovely haircut (thank you, Steff, as ever) which has made my neck a lot cooler, and yesterday K and I went to see the livestream cinema showing of Macbeth with Ken Branagh. Macbeth is of course my favourite ever play - so human, so evil, so much lost opportunity - and everyone is raving about this particular version. I'm a great Ken fan, I have to say, but I don't think his Macbeth is his best ever performance. I preferred his Hamlet, and actually I thought Patrick Stewart made a much better, more measured Macbeth a couple of years back. I am the only one saying this however, from my glance at the reviews. I did think the witches in this version were fun though, Alex Kingston nailed Lady Macbeth, and it was the best Macduff I've ever seen - so much so that it made me cry. A great moment. 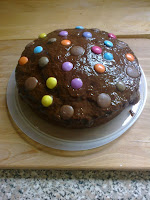 Oh, and there's cake. When is there not? This week it's Dotty Chocolate Chip Cake, and it's very tasty indeed. Hurrah.

This week is the week I receive a 1-star review for Christian novella The Prayer Seeker - not because the reviewer thinks it's rubbish, but because they believe it "cannot be Christian fiction as the main character is homosexual, and you can't be a Christian if you're gay". Or words to that effect. Ye gods and little fishes - did someone transport me back to the 18th century, or am I just living in a time warp?? Those comments certainly brought me up short - made me feel quite ill in fact - and it certainly goes to show how far we in this world must still travel before homosexuality is seen as utterly normal in every way, even a Christian way. Hey ho indeed.

In spite of all that, I'm happy to say that The Prayer Seeker is No 20 in the Amazon UK free Christian Fiction charts, was at No 68 in the Amazon US charts, and also received a more measured 5 star review at Smashwords. Many thanks for that.

I also have an exciting new cover for romantic comedy Pink Champagne and Apple Juice, which is due out from Musa Publishing in September. Can't wait for that one.

Meanwhile, fantasy novel The Gifting made it up to No 15 in the Omnilit Books Free Fiction charts, and gay romance Where You Hurt The Most gained a 4-star review at Goodreads. The reviewer called it "an endearing and poignant little love story" - so many thanks for that.

Finally, I'm utterly thrilled that gay erotica story The Beginning of Knowledge gained a 4-star review at The Armchair Reader who said, amongst other comments:

"The writing here is superb. I felt as if I knew Alan intimately only a few pages into his first person narrative because for all that he's blind to what is going on he's starkly transparent. So I commend Anne for writing a story that is indeed knowledgeable, that is informative but at the same time seductively sexy. I think you should read this one just to see what you take from it."

Many thanks also - that's made my day.