Christian novella The Prayer Seeker gained some 5-star reviews this week, which was most welcome. First off, at Amazon UK, where it was "absorbing and moving"; then at Amazon US where it was "an unexpected delight"; and, last but by no means least, at Goodreads (thank you, Karen!):

"The Prayer Seeker had me glued to the Kindle from the first page and I read it in one sitting. A lovely gentle Christian read for those who believe in a loving all encompassing God."

Gay-themed epic fantasy, The Gifting, has continued to be popular at Amazon US, with another 1000+ downloads in August (similar to July's downloads). It also passed its 1000 downloads marker at Free Ebooks, so that was a nice boost.

Over at Untreed Reads, there's a 40% discount on all my books until Monday 2 September, and in addition if you buy bisexual literary thriller Thorn in the Flesh, you can get another book for free. Happy shopping!

I've also finally finished the first draft of gay fantasy The Taming of The Hawk (hurrah! It's certainly taken me long enough ...) but there's a fair amount of editing to do, but I'm going to have a break before I get started on it, I think.

Finally in this section, there's a new interview with me over at Smashwords, so do pop by and have a read to see what I'm up to - all visitors welcome, of course.

This week, I attended my last staff meeting as a member of Student Support before I move across to the Registry next week. I'll miss Student Support as I've worked there for over 9 years now, but it will certainly be interesting to see the University from a different perspective. I was very touched at the meeting too as they actually gave me a round of applause which was lovely. Thank you, all! Though whether that meant they were sorry to see me go or overjoyed to get rid of me has yet to be ascertained ... Mind you, K said that when they started clapping, I should have told them to just throw money instead - ah, think of the fortune I might have made!

On Friday I have to say I played a stonkingly good game of golf - and actually won, which is very rare! I even got a par on the last hole, which was astonishing. Honestly, I have no idea why I was playing so well - and it definitely won't last till the next time - but I felt I could have spat at the ball and it would have gone in the hole. I shall bask in the glory while I can, hey ho ... 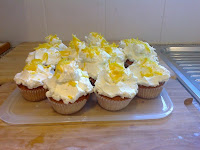 Yesterday's cake was Limoncello Cupcakes, which are very nice indeed and surprisingly light - but surely with the amount of cream and alcohol in them they are probably taking at least 5 years off our lives. Still, what a way to go, eh. I shall be making them again in the not too distant future, that much is certain.

And yesterday afternoon, K and I popped into Guildford to see a Peter Shaffer double bill at the theatre. We didn't think much of the first offering - A Private Ear - as there wasn't much to it and it was something of a one-trick pony. But the second offering - A Public Eye - was just brilliant and well worth the money. Witty and wise and zany, it was Shaffer at his best.